The Golden Gate Theatre opened in San Fransisco in 1922 as a vaudeville house. It later became a major movie theatre, featuring a Cinerama screen in the 60s. In the early 70’s the venue fell into a state of decline, but it was quickly picked up and restored by the late 70s, and reopened as a venue for the performing arts.

The Golden Gate is now under the proud ownership of SHN, a theatrical producing company run by Carole Shorenstein Hays and Robert Nederlander. SHN have presented a huge variety of Broadway productions at the Golden Gate, including Chicago, Sweeney Todd, Hairspray, Mamma Mia!, and Rent to name a few. In addition, the venue also hosted the preview engagement of Legally Blonde: The Musical prior to it premiering on Broadway, as well as the pre-Broadway engagements of revival productions of Cabaret, Joseph and the Amazing Technicolor Dreamcoat, and My Fair Lady! 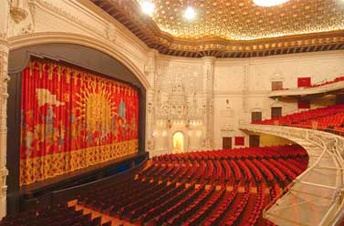